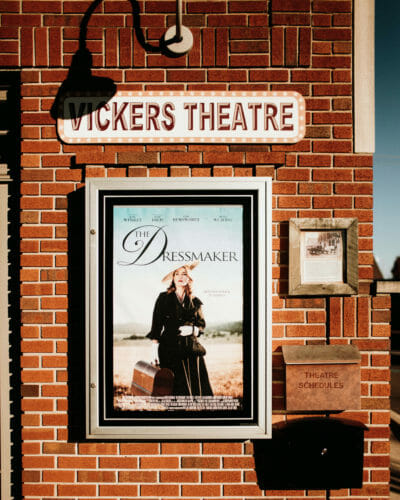 People of a certain age might remember main street cinemas. Once a common fixture in American towns of all sizes, they were the place communities gathered to escape the everyday and experience extraordinary stories together. Today, by and large, movie houses have given way to cineplexes designed to serve masses instead of communities. But not in Three Oaks, Michigan.

Along Elm Street, in the heart of the village, stands Vickers Theater.

A STAR IS BORN

Originally built as a livery in the 1890s, the building’s first turn as a theater came in 1939, a time when downtown Three Oaks boasted three movie theaters and an opera house. The Lee Theater was a vibrant family-run enterprise for decades until ownership, and eventually the times, changed in the 70s. By the early 90s, the last of Three Oaks’ cinemas was forced to close its doors.

Enter Jon Vickers, an engineer at his family’s local firm, but also an avid film fan. And just young and crazy enough to pursue a vision to restore the building and re-open the cinema. And so, in 1994, Jon, his wife Jennifer, and their three young children purchased the building and began a painstaking two-and-a-half-year restoration.

The freshly minted Vickers Theatre opened with a screening of Citizen Kane in 1996.

Once again a family enterprise, Jon tore tickets and ran the projector. Jennifer worked the concession stand. In no time, the theater became a community hub, just as it had been so many years before. Independent and foreign film, as well as classic art house masterpieces, found an audience in Three Oaks.

The next 14 years saw exciting growth in the creative community of the south Michigan shore and a remarkable revitalization of Three Oak’s downtown district. As the theater’s reputation grew (Roger Ebert was a regular patron), Jon was invited to direct Notre Dame University’s DeBartolo Center, and then a few years later, to found Indiana University’s flagship IU Cinema in Bloomington. A very compelling opportunity, but what would happen to the Vickers’ beloved theater?

Joe and Judy Scully were having dinner with friends, Bill Lindblom and Alan Palmer, when Bill hit them with the question.

“Did you hear about Vickers Theatre? They’re selling it.”

The four had been friends for years, bonding as former Chicagoans lured by the Michigan lakeshore, eventually making it their fulltime home. Bill and Alan operated a small antique shop in Lakeside, while the Scullys enjoyed retirement from their careers in banking and education. They were Vickers regulars, and like so many in the community, had a great deal of affection for the place.

The couples wondered if the Vickers would find a buyer, and if it did, would the theater maintain its charm and commitment to quality programming?

“After Bill told us the Vickers was for sale,” said Judy, “Joe kept bringing the conversation back to the theater. It was like he knew it was a jewel that needed to be saved.”

A man on a mission, Joe finally pulled Bill aside and asked if he would be willing to run Vickers.

“I’m not sure we knew what we were getting into,” said Bill. “But Joe seemed sure we could do it and we all believed him.”

And so, the old Elm Street building’s power to inspire leaps of faith struck again. In 2010, Joe, Judy and Bill purchased the theater. The three had no experience running a movie house, but they were expert consumers of the small cinema experience.

“Jon and Jennifer had built something very special and we wanted to honor that,” said Bill. “But we also knew we needed to follow our instincts.”

Armed with instincts, feedback from faithful Vickers customers, and lots and lots of movie reviews, the trio curated a lineup that focused on critically acclaimed independent films with proven audience approval. A little less esoteric than their predecessors, but an absolute win for the community. Ticket sales were stable, and ultimately grew.

Today, neophytes no more, Bill is constantly thumbing through catalogs, reading reviews, and staying on top of festival favorites while managing the theater operation. Judy attends festivals to experience audience reaction and industry conversations first hand. Equipped with an upgraded digital projector and online ticket sales, the Vickers legacy, as well as its future, are firmly intact.

“The Vickers is a bit of a phenomenon actually,” said Bill. “We shouldn’t be able to exist—this little independent movie theater in a small town. But we have these amazingly loyal and supportive patrons who come out week after week.”

Perhaps it’s the carefully considered line-up of films. Or the intimate space rich with history. Or maybe Bill’s charming pre-screening chats full of fun facts and insights. Or the sense of community that occurs when friends, neighbors and strangers experience art together. Perhaps the Vickers phenomenon is really no wonder at all.

“A good movie can change your life,” said Judy. “It’s a beautiful, wholesome setting to cap off a beach visit and people wander away happy. I’m a lucky human being to be part of it.”

“Many people are here on vacation and come to get away from their lives,” said Bill. “There’s nothing that takes you further away more quickly, and then returns you safely, than a great movie.”

Authors’ note: Joe Scully passed away in December 2016 after a long illness. We are all grateful for his persistence that night at dinner, and his willingness to take a leap of faith.

Winter Rules — A Case for the Chilly Season

Musings from the South Michigan Shore 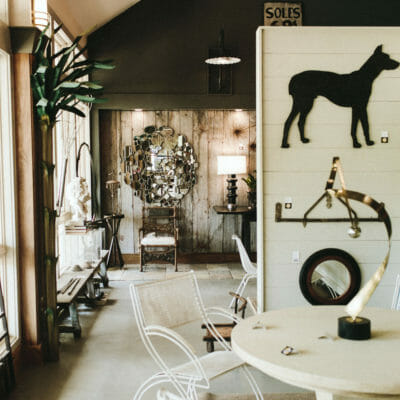 An interview with the owner and winemaker of Hickory Creek Winery.